The visionary profile to evolve the Village of Herkimer to become the Retail Center of Herkimer County is one that has garnered passionate discussions for the past several years preceding the development of this Master Plan 2020. This advocacy by Village residents and business owners was further emphasized by the 1st place ranking of the Characteristic Group “Herkimer County’s Retail Center Hub” in the Village Profile Survey.
Current Retail Profile
The development of the Village of Herkimer as the County’s Retail Center is not something new, in that over the years the Village has amassed more national and regional chain locations than any other municipality in the County. As denoting by the map to the right, there are national/regional chains such as Auto-Zone, Applebees, McDonalds, Taco Bell, Verizon, Walgreen’s, Walmart, Stewart’s Shop, Herb Philipson’s, Subway’s, Fastrac, Denny’s, Tractor Supply Co, Red Roof Inn, Burger King, Mavis Discount Tire, Enterprise Rent-A-Car, Arby’s, Nice N Easy, and Hannaford. 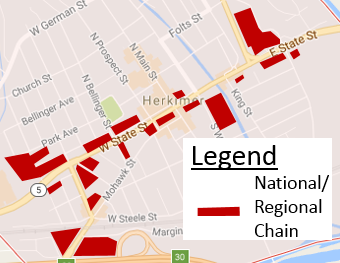 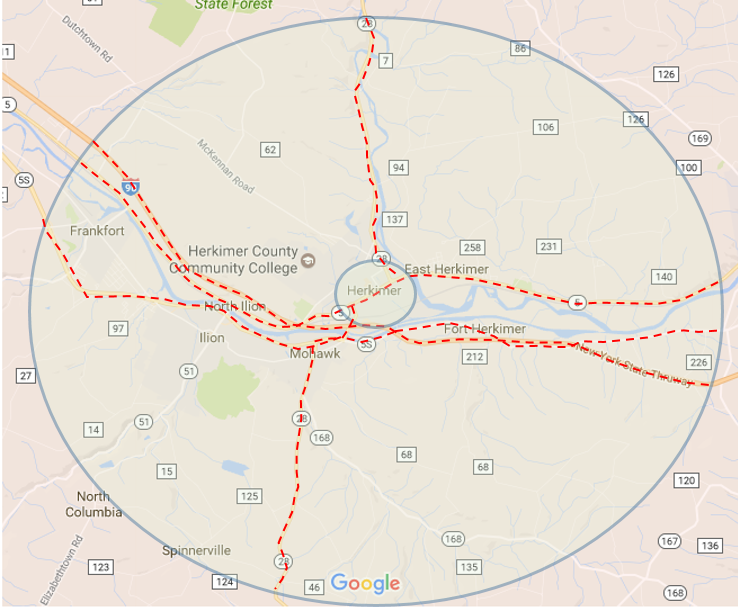 Retail Center Profile
With all of the positive positioning that the Village has achieved per its role as the Retail Center of Herkimer County, it is not without a number of issues, and therefore development opportunities that need to be address.
The primary issue of the retail profile of the Village is the current state of Main Street, which has degraded over the past few decades, from a vibrant retail landscape to one that is now shunned by residents and avoided by retail businesses that are seeking opportunity in the Village.
The photo chronology below depict recent decades where North Main Street had retail appeal and “traffic” – during the 60s, 70s, and 90s. It also provides the desperate profile that has evolved in the past decades from retail appeal to barren streets, shoddy store fronts, the sleep quarters for the homeless, and North Main Street has become the “stoop” for those living in the low income apartments above. 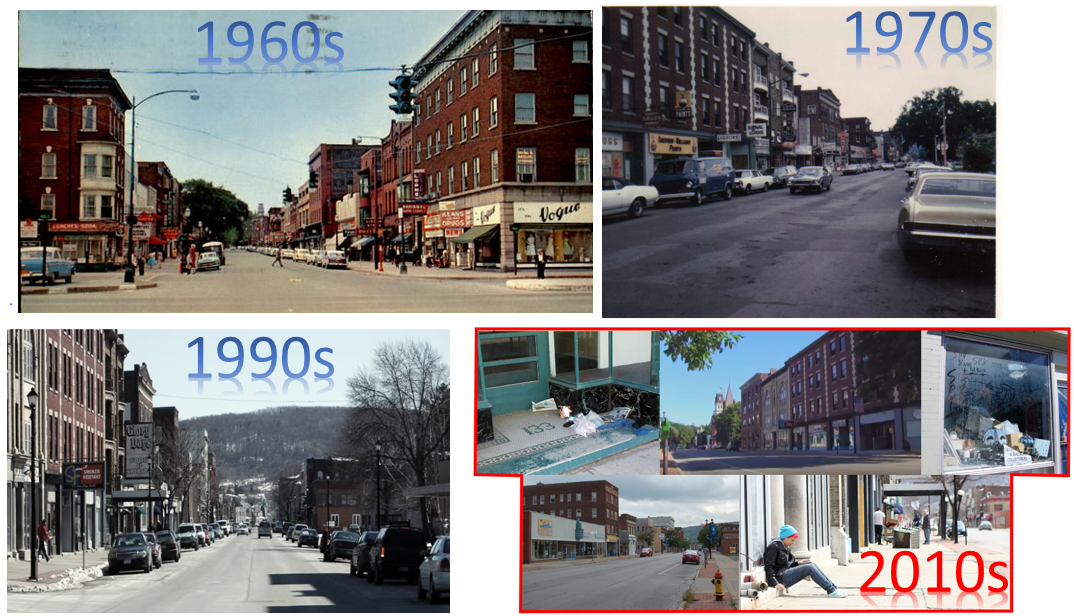 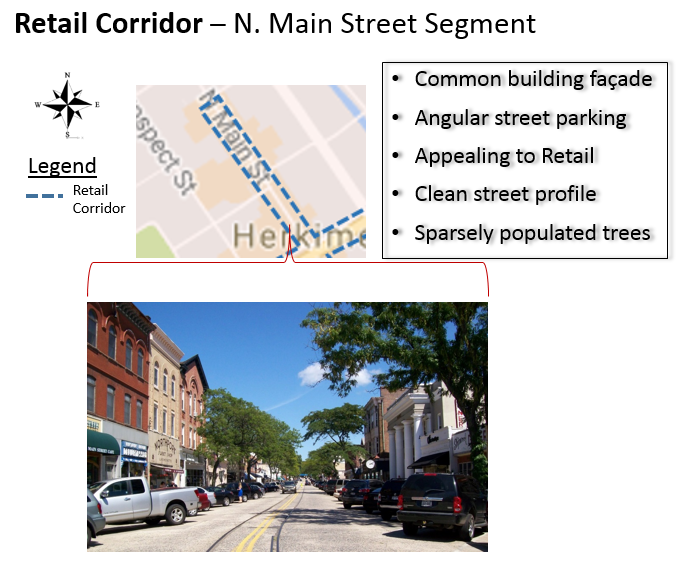 Another example is provided showing how N. Main Street could be segmented to provide a foot traffic Marketplace in the northern most portion of the newly created Retail Corridor. By creating a one-way (east to west) single lane road that connects North Washington Street over the current driveway of LW Bills through to N. Main Street, vehicle access is provided for north to south traffic.
By having the Marketplace occupying the roadway from the Mary Street intersection to the newly created “Market Street”, there would be a new persona for local retailers, boutiques, clubs, diners, and kiosk vendors that would also be leveraged to profile seasonal decorations for residents to shop, dine, and enjoy entertainment throughout the year. This is another example of what N. Main Street could be transformed to support in the year 2020 and beyond. 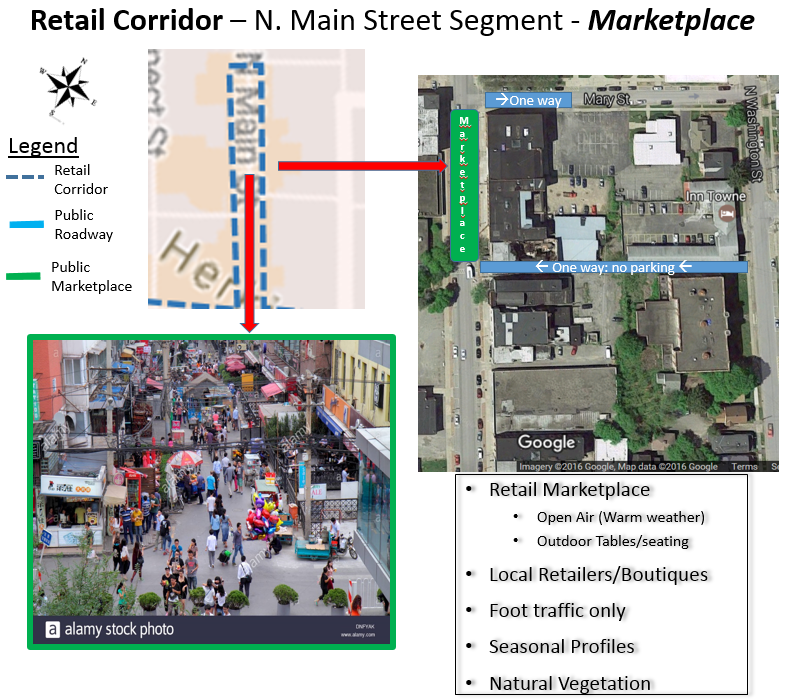 The key to achieving any acceptable profile for the Retail Corridors is to establish a set of zoning profiles that are applicable to the retail community in each of these thoroughfares. Examples of this profiling would be:
Commercial Business Population Profile: RC1 Zone 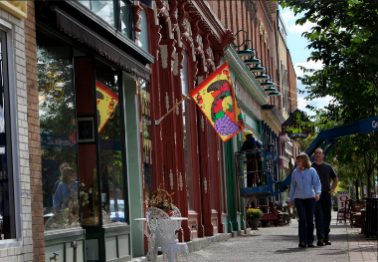 As a general guidance for the Village, the profile of businesses existing in the “to be formed” Retail Corridor has a mix of national (i.e. Applebees, Rite Aid, Walmart), regional (i.e. Hannaford, Herb Philipson’s, Stewart’s Shop), and local (i.e. The Endzone Pub & Grill, Hot Swaps, Hummel’s Office Plus, Crazy Otto’s Empire Diner, Weisser’s Jewelers), businesses providing products and services to residents, those that work in the village, visitors, and travelers.
As noted in the zoning profile overview, the RC1 zoned area should be focused on being populated with local businesses – concentrating on Village unique shops, dining, and entertainment – that adhere to a specific profile/persona, including frontal presentation and façade. This profile is consistent with many other communities throughout the country where persona development of that zoned region is an imperative. When opening that region to regional and national chain retailers, it is more difficult to establish consistent persona profiles due that retailer standards for branding, such as signage and frontal décor.
This profiling also enables local businesses to benefit from the foot traffic areas that entice residents and those working in the community to support local business owners.
However, when viewing the Village of Herkimer as it is centrally positioned for travelers and tourists visiting the region, then brand recognition of both national and regional retailers is critical to increasing business traffic. The brand recognition of national or regional businesses serves to entice those that would normally pass the village by, either via the NYS Thruway or NYS Routes 5, 5s, and 28, to stop in and shop or dine. 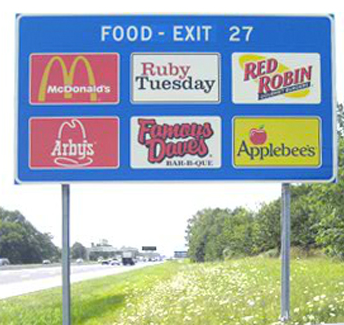 This brings a broad range of customers into the Village, with the added enticement that the downtown area (RC1 zoned area) provides local venues of interest. Both dynamics of business profile are positively affected when segmented in a manner that is fitting with the market demographics of the specific consumer set.
Commercial Business Population Profile: RC3 Zone
The profile of the RC2 zone is not further expounded on since much of what has developed in that targeted region (S. Main Street, S. Caroline Street, Albany Street, and Mohawk Street) are expected to continue developing in a manner similar to what they have over the past decades. There will be formalizing of the RC2 zone profile and that profile will be applied to all properties.
Pathways of the Retail Corridors Throughout Herkimer County
The broader and longer term vision of the Village of Herkimer being the Retail Center of Herkimer County is to collaborate with the other municipalities of Herkimer County, such as Mohawk, Ilion, Frankfort, Schuyler, Little Falls, Middleville, Newport, Poland, and Dolgeville to adopt the Retail Corridor zone classification. By adopting the Retail Corridor zone classification in all of these municipalities, there would be a consistency throughout the southern portion of Herkimer County where retailers locate and how they are presented/profiled.
The term Pathways of the Retail Corridors refers to the establishment of directional signage from one municipality’s Retail Corridor to another municipality’s Retail Corridor, maps of all Retail Corridors in Herkimer County, and promotional/marketing programs that list all product and service retailers, etc. Though this is beyond the scope of the Village of Herkimer Master Plan 2020, it is presented in hopes of enticing a broader community spirit throughout the southern Herkimer County region.