This section will outline the details of the Survey Characteristic Group:

To set the stage of the coverage of infrastructure fitness, reference is made to an on-line accessible definition (per http://www.ci.harker-heights.tx.us/index.php/public-infrastructure/21-planning-and-development/110-public-infrastructure-faqs) that defines public infrastructure as:
It is this definition that is applied to the areas of coverage in this section. It should be noted that other sections will include reference to public works support of the Village, such as those pertaining to parks and recreation. This section will give focus to the core infrastructural requirements by identifying the general state of roadways, water and sewer systems, and storm water management. Coverage of “other infrastructure” will be referential to establish perspective regarding its support.
State Roadways
The Village roadways are supported by both the Village Department of Public Works and the New York State Department of Transportation. As noted in the diagram below, the NYS DoT supports Route 28 (2.6 miles in length) and Route 5 (1.9 miles in length) as they traverse the Village where .7 miles is shared as Route 28 and 5 overlay per East State Street (noted in red).

The maintenance of this set of roadways is the responsibility of the NYS DoT and therefore will not be detailed in this document. 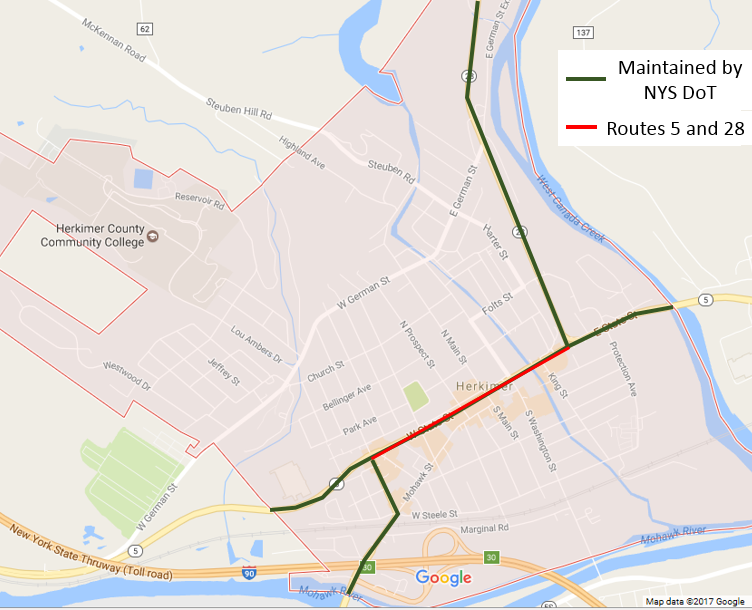 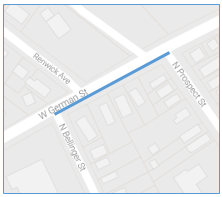 As listed in detail in Appendix L - Local Roads Listing there are roughly 280 road segments in the Village of Herkimer, where a road segment is the portion of a given road that has a specific start section and end section. An example would be the section of West German Street from the intersection with North Prospect Street to the intersection of North Bellinger Street as identified in the image to the right.

The local roadways measure roughly 28 of centerline miles, which is the length of traveled pavement surface, and over 56 lane miles.

For example if a roadway, such as West German Street is .87 miles of centerline and supporting two (2) lanes, then it supports 1.74 (2 * .87) lane miles of roadway. This is important because when roads are constructed, repaired, repaved, maintained, or plowed, it is the lane miles that have to be used in calculating cost.

Based on the recent investigative report by Baker (2017), the 2016 cost to pave roadways in Syracuse, NY is posted at “… $1 million to pave a mile of road, including things like new curbs and corners.” The article goes on to note that Public Works Commissioner Peter O’Connor never has enough funds to do the 411 miles (assuming centerline) of roadway, so they use a rating system (1 to 10 with 10 being best) to determine which roadways are most in need paving. As the article explains, for 2017 there is only $2.5 million budgeted from for road paving – resulting in less than 1% (2.5 of the 411 miles) of the roadways being paved.

The Village of Herkimer has 28 miles of roadway, which would require roughly $28 million to pave all the roadways once. Based on discussions with Village officials, the budget for paving is less than $200,000 per year, which (as with Syracuse) supports less than 1% (.2 of the 28 miles) of the Village roadways. As with Syracuse, without a drastic increase in funding for roadway maintenance, it will take 100 years to pave every mile of roadway once.

It is therefore imperative that the Village develop a method of ranking road fitness versus traffic levels to determine road paving/repair prioritization that would drive the development of a 10 year paving/repair strategy.
Sidewalk Support for Pedestrians
The term sidewalk is defined (per https://en.oxforddictionaries.com/definition/sidewalk) as “a paved path for pedestrians at the side of a road”. This is sufficient as a definition, but is often viewed differently in how it is supported depending on the profile and construction of local versus state roadways.
As per the survey results, 75% of those that responded require the Village to ensure that all existing sidewalks are maintained to be “walk friendly”. This includes ensuring that they do not fall into disrepair and could harm individuals of any age (age agnostic) due to issues such as broken or uplifted segments or requiring that individuals walk in the roadways to avoid such issues of disrepair. 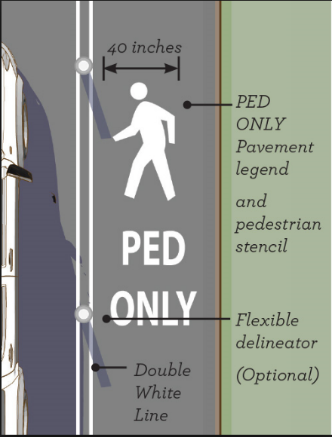 There are a number of roadways in the Village that do not have any formal sidewalks both NYS and Village owned and maintained. It is recommended that a portion of the Capital Improvement Plan include detailing of how sidewalks are support on all roadways. This could include working with the NYS DoT to remedy the lack of sidewalks on Route 28 (for example) as well as Village streets, such as those in the northwest region of the Village or on Marginal Road. Some examples of a low cost remedy include providing roadway lines on the edges of the roadways denoting them as walk-only regions to keep vehicles from being legally allowed to ride the edges of the roadways, thereby providing pedestrian protection.
Roadway Support for Bikers
The Village of Herkimer does not provide bikers with their own “lanes” on roadways, whether they are NYS or Village owned and maintained. Due to the limited amount of bikers in the Village, it is not recommended that a separate bike lane be provided, but rather that the operating of bikes be permitted on both roadways or on pedestrian walkways. The determination of which is allowed for each roadway should be well documented and available to bicyclers on a public website or in paper form through a Village publicized location (i.e. Village office).
Village Lighting
The operation of street lights are supported by National Grid as part of the service package that the Village pays a yearly fee of $183,000. This package includes the maintenance of the street lights, including “keeping the lights operational”. For that reason, there is no review of that portion of infrastructure.
It should be noted that the Village previously made a decision to drastically reduce the number of traffic lights throughout the Village. These traffic lights were replaced with four-way stop signs and reduced the cost of operation and maintenance. The Village only supports the operation of 3 stop lights (located at the intersections of North Washington Street and Green Street; West German Street and Exchange Avenue; and South Washington Street and East Steele Street; whereby all other street lights that operate on NYS Route 5 and 28 are supported by the NYS DoT.
Village Water Systems
Village water is provided primarily from a reservoir that is located 20 miles north in Gravesville, NY. The image to the right shows the (on the far right side) the 20 miles between the Village of Herkimer and the reservoir at Gravesville. The blue line is a general profile and not the specific path that the underground pipe navigates as it transfers the water over that 20 mile stretch of land.

It should be noted that the water pipe that covers that 20 mile journey was constructed back in 1929, meaning it is close to being 100 years old, and there is a definite need to either replace or wrap it (done in sections over the coming years) to reduce the grave risk of the water source to the Village. Though there are “markers” that plot out the location that the underground water pipe is located, the locating of those markers should be mapped via a digital GPS coordinate map that would greatly assist Village engineers. 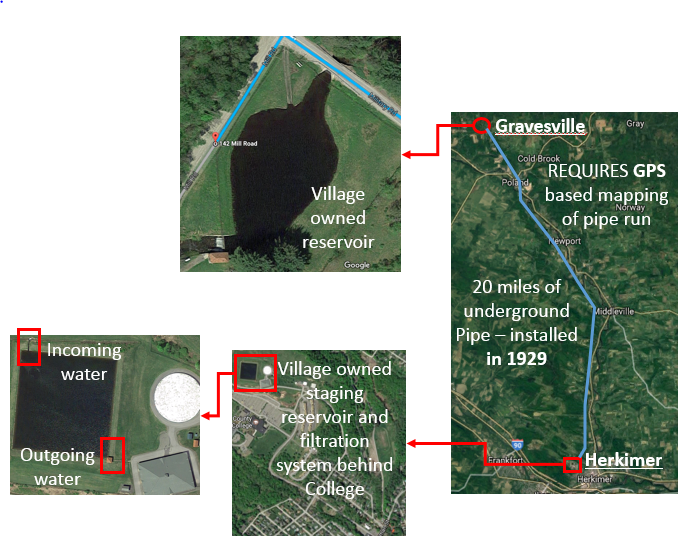 It should be noted that there are roughly 16 properties along the 20 miles of water pipe that draw on water from the Gravesville reservoir as compensation for gaining easements to the various properties that are traversed. It is further recommended that the water coming in from the open reservoir be processed by a low-maintenance ultraviolet light water treatment that would eliminate over 99% of the microorganisms present in the water prior to its traversal over the 20 mile stretch. This would assist those properties drawing on the water from being on a “forever boil water” status.
The pipeline from the staging reservoir to West German Street has suffered 15 breaks since its history and the Village has obtained grant funding from NY State (???) to replace the 2500 foot section of pipe (highlighted in green) in the 2017/2018 calendar period. The remaining 2000+ foot of water pipe (highlighted in blue) should be replaced as soon as financially feasible either through Village budget or via NYS or federal grant to reduce the on-going challenges of supplying water to Village properties.
The water from these wells is pumped to the same staging reservoir behind the College when required. There are no issues reported with this backup water supply, therefore no recommendations are offered.