This section will outline the details of the Survey Characteristic Group:

The Village of Herkimer is a municipality that has always had a family or household rich population (over 50%), whereby family is defined by the US Census Bureau (per https://www.census.gov/hhes/families/about/) as:
"… a household in which there is at least 1 person present who is related to the householder by birth, marriage or adoption”
and whereby a household is defined by the US Census Bureau (per https://www.census.gov/quickfacts/meta/long_HSD410215.htm) as:
“… includes all the persons who occupy a housing unit as their usual place of residence. A housing unit is a house, an apartment, a mobile home, a group of rooms, or a single room that is occupied (or if vacant, is intended for occupancy) as separate living quarters. Separate living quarters are those in which the occupants live and eat separately from any other persons in the building and which have direct access from outside the building or through a common hall. The occupants may be a single family, one person living alone, two or more families living together, or any other group of related or unrelated persons who share living arrangements.”

This section will start by detailing the means of identifying and regulating Residential properties that will support both the US Census Bureau definition of the family and the household. It will then proceed to overview the way in which the Village should support “outside of the home” activities that apply to the various personas of age, including sporting and recreational activities. It will then finish with a strongly suggested approach to developing opportunities for “blended age” activities that often move residents of a municipality to become members of a community.
Residential Zoning - Predictive Profiling
As with most municipalities, housing units located in a geographical area zoned as Residential is restricted from allowing properties in such zoned areas to be used for non-Residential purposes, such as commercial operations of a business. This restriction ensures that those residing in the Residential areas be protected from commercial businesses introducing business related automotive or foot traffic from encumbering their residential area. If an area of the Village is zoned as Residential, it would require approval of the Village Administration (i.e. Board of Trustees, Zoning Board, Planning Board) to permit the alternate use of a Residential property to be used for Commercial (or Industrial) use.

It is also necessary to formalize the various profiles of Residential zoning whereby one form of Residential zoning may only permit single family/household dwellings that can only be occupied by the owner of the dwelling, versus multi-family/household dwellings that are allowed to be tenant occupied, versus those that are specifically developed to enable tenant housing such as an apartment building or housing complex. Each has its purpose and should be considered when developing a “family focused” community so there is purposefulness and rationale when assigning specific residential zoning profiles to specific areas of a municipality – or in this case – the Village of Herkimer.

To ensure that type of regional and predictive zoning, it is recommended that the zoning be reviewed, refined, and allocated as to create residential profiling that is the least disruptive to existing occupancy within the Village, while establishing clear differentiation between the various residentially zoned areas.
The current residential zoning ordinance as defined per the Local Law #3 of 2012, Amended Zoning Ordinance, Village of Herkimer, New York (pgs 7, 8) organize residential zoning per R-1, R-2, and R-3. For details on definitions of these zoning districts, reference the document noted.

When reviewing the definitions of uses permitted in the R-1, R-2, and R-3 zoning districts, it is clear that there needs to be a means of creating more distinctive refinement for the following reasons:

There presently exist three locations that provide varies support as recreational facilities that are primarily available during fair weather seasons (spring, summer, and fall) and are located in areas accessible to those in: 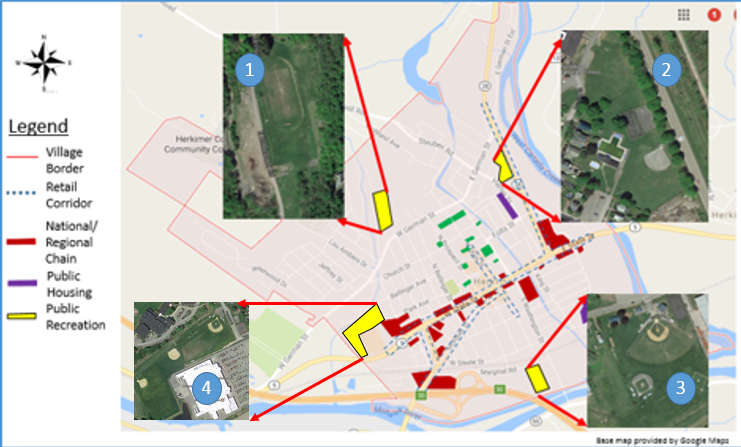 Winter support is an area that is lacking in all Recreational Parks. However, in the 60-70’s Harmon Field used to be flooded in the winter and provided as a Skating Rink, leveraging the on-site building for bathroom and equipment changing area. This should be brought back into operation to enable winter activities for the community, and provide a venue for winter festivals and holiday events.
Public Parks
A municipality that promotes a Family Friendly persona should also provide public parks that are used for public events (i.e. seasonal celebrations), nature walks, physical exercising, resting on pubic benches, or other type of park supported activities. Examples of public parks available within the Village include: 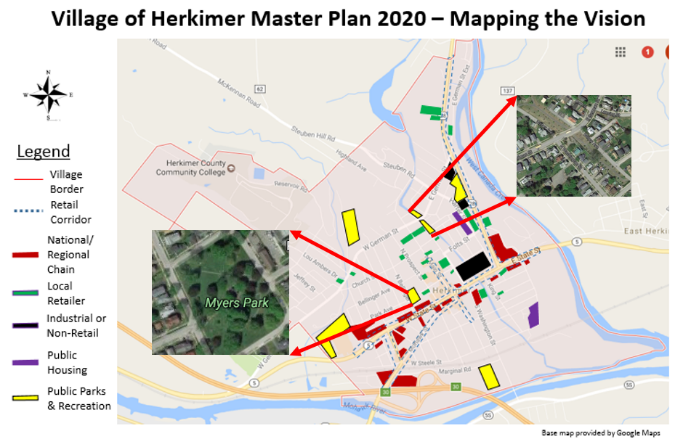 The Hydraulic Canal Greenway was developed in 2009 and was funded by government economic stimulus grant, which did not extend the full length of the original Hydraulic Canal, but stopped at its intersection with Weber Street. The remaining portion of the “once Hydraulic Canal” was filled in and developed into either parking of private land space southward until it East Smith Street. From that point on, the Hydraulic Canal remains a waterway that traverses south-southeast until it eventually passes under the railroad bridge and empties into the Mohawk River.

Rather than honoring the Hydraulic Canal’s southern portion as a monument of industry’s past, it is recommended that the Hydraulic Canal Greenway should be continued from East Smith Street until it reaches the train bridge beyond East Steele Street. This would provide a strolling park for southern residents of the Village and both the existing northern section and the newly formed southern section should be enhanced to be a walking, sitting, and nature park that it was intended back in 2009.
Proposed Parks & Recreation
The Village of Herkimer has several locations that should be viewed as additional areas to be developed (or marketed) to offer Park & Recreational services. The map image below profiles three such areas that leverage Mirror Lake (upper left portion of the image), the existing Erie Canal Cruises (lower left portion of the image), and an additional large land plot (lower right portion of the image) where the West Canada Creek and the Mohawk River join. 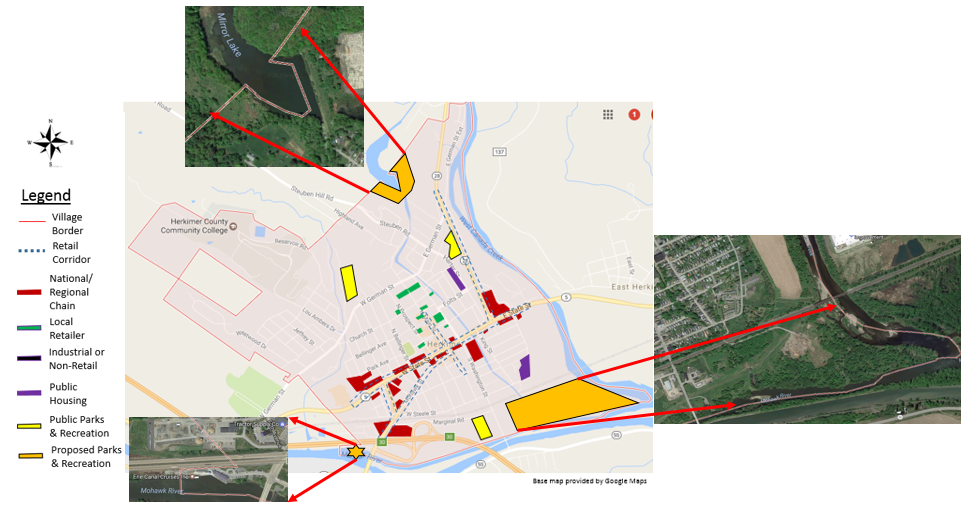 The land that borders Mirror Lake is also privately owned, but should be reviewed to determine if there is opportunity to develop it to provide recreational services. Such services include family picnicking, nature trails, and water sports such as kayaking, canoeing, and all season fishing both in the warm and cold (ice fishing) periods.

The large land area in the southeastern portion of the Village was previously used as the location of the Village dump and for that reason has had little appeal for development. However there is an enormous value to this land when viewed for development as a park for outdoor recreation. Like with Mirror Lake and the cruise service provided by the Erie Canal Cruises, this location can support locations for picnicking, family/community gatherings, nature trails, fishing, and boating. This area should also be investigated for development to enhance the services available to residents and visitors of the Village. 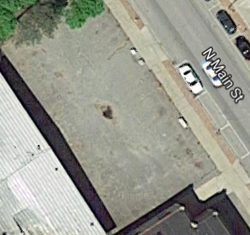 The property image on the left, next to the DEC office at 225 N. Main Street should be converted into a park that adjoins the current park alongside the Frank J. Basloe Library located at 245 N. Main Street.
Community Centers
A community center is defined as a place where those that live, work, or visit a community can meet for social, educational, or recreational activities. Community centers can be funded by federal or local government; community organization(s); private citizen(s) or commercial corporation(s); or commercial organization owned and operated.
Community centers can be supported through a variety of profiles, including:
The management of these Youth Centers should be done in accordance with the sponsoring community organizations/businesses but the facilities offered should be those defined as a collaboration of Village representatives and the sponsoring organizations.

As represented by the Youth Center image above, there should be gaming such as billiards, table tennis, foosball, tables for board games, as well as seating areas of creative discussion and arts/crafts. It is also strongly encouraged that the elderly of the Village be enlisted as volunteers to provide an opportunity to bring together those of broad age groups, establishing community building through interaction.

Additional requirements and/or suggestions that were entered by survey respondents include: